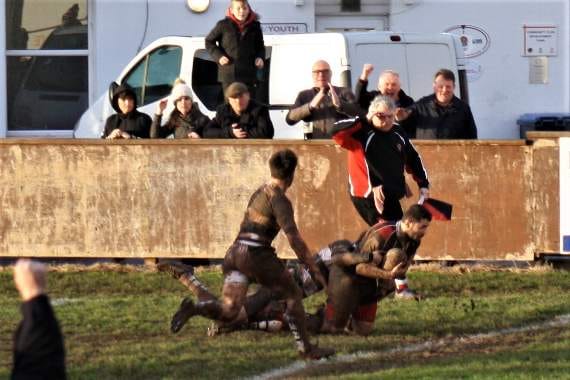 WINNING SCORE: Matt Laventure goes over in the corner in added time. ()

Nobody who has visited Bitton Park this season will be able to claim that they have been short-changed in terms of value for money, reports Paul Williams.

The results of the last five matches have all been in doubt right up to the final whistle, and this game against league leaders Exeter University will go down in the club’s history for the completely unexpected manner of its outcome.

After losing heavily to second-place Drybrook the previous week, few would have given the Teigns a chance against the table-toppers, and the first half followed that script pretty closely as the students ran in three tries through Kaz Eelam, Dom Thorn and Jesse Lipetz-Robic, two of which were converted by Charlie Davies, leaving the Uni 19-nil up at the break.

However, there was enough evidence in that first period to suggest that the Teigns were not going to be rolled over, and whatever coach Marc Dibble said at half-time, it certainly had the desired effect.

Within 10 minutes of the restart the home side had reduced the arrears by 10 points.

First, man of the match Ben Allison got on the end of a rolling maul, and then winger Matt Laventure powered over for his first try of the afternoon.

At that point Teignmouth must have smelt the possibility of a shock win, but they still had plenty of defending to do. The Uni had a proud record to protect, and see themselves eventually following Hartpury College’s example by moving through the leagues. But they will rarely come up against such a spirited performance as that produced by the Teigns.

Having survived the onslaught, the home side set about producing an unlikely victory, and when Laventure set up centre Faolan Lidstone on the hour, and the try-scorer then converted, players and supporters alike began to believe.

In those last few home games Teignmouth have seen defeat snatched from the jaws of victory more than once, but on this occasion it was their turn to score the winning points in the last play of the game.

Constant pressure on the Uni defence forced the students into making mistakes and with the referee’s watch well into the red zone, the home backs got their hands on the ball in their opponents’ 22 and with some skilful running and passing found Laventure on the left wing to round off a tremendous comeback.

Full story and more pictures in the Friday, January 26 edition of the Mid-Devon Advertiser/Teignmouth Post