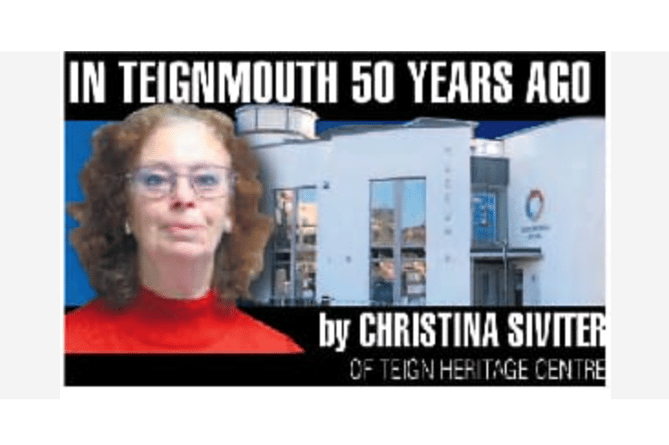 A new event, sponsored by Whitbread Flowers Ltd drew the crowds. Twenty waiters and 13 waitresses made a dash down the length of The Den carrying trays and bottles. When they reached the other end, they poured the contents of their bottles into the glasses, then ran back to the finishing post. Points were awarded for the fullest glass and the cleanest tray. The winning waitress won £5 and a half bottle of gin, the steadiest waiter £5 and a bottle of scotch.

At midnight on Monday, the new L car registration came into operation. Minutes after the stroke of twelve, the new owner, Mr T Hope, of the Beach Hotel, received the keys of a Toyota Celica from Mr P Roberts of the Courtenay Garage, who said: ‘Mr Hope has been itching to get it on the road. He was so enthusiastic that we arranged to let him have the car at one minute past midnight.’

No more deaths recorded in Teignbridge

A revolutionary new sailing craft said to be capable of 30 knots is being built at Forde Park School, Newton Abbot, by a team of boys and staff similar to the one which earned the school fame for its hovercraft projects. While this prototype is sail powered, its novelty is in the hydrofoil system itself, and the basic principles could be applied to large and small powered boats.

The Bermuda rigged catamaran, 26ft long and 14ft wide, in glass fibre and aluminium, is the brainchild of internationally respected British scientist, Mr Christopher Hook. The United States Navy is actively interested in the system, and Strathclyde University, after extensive computer research, said the incidence controlled system, in which the angle of the foils to the water varies with the craft’s speed, promises to be the most efficient method of water transport devised.

Sir: If it is really necessary for the ice cream carts to assault our ears daily over a wide area, with their clashing chimes and broken tunes, would it not be a graceful act on their part occasionally to afford us the opportunity of buying ices at our doors, even in these remote jungles outside the council estates?

A foundation stone was laid by the Bishop of Crediton, the Rt Rev A E Westall, at the hill-top site at Mill Lane. Minutes later, lorries carrying bricks rolled onto the site to carry on with work which is planned to be completed by June next year. It will accommodate 28 houses and flats, and there are magnificent views of the Teign.

Home ownership at a realistic price is the aim of the Inverteign Community Housing Society. The scheme allows the residents to have a house on a 40 year mortgage. Co-ownership means that the mortgages cover the cost of the whole scheme, including all the roads, services, gardens and public open spaces, as well as the dwellings. The only restriction is that the property must be sold to the Society, and not on the open market.

Redundancy notices have been served on Hercules and Atlas, the last two operational horses of the mounted police in RAF Akrotiri, Cyprus. They will be transferred to the Akrotiri Saddle Club. The mounted section includes Corporal Barry Gribble, who comes from Devon. His parents, Mr and Mrs Ronald Gribble, live at Newholme, Mill Lane. Barry has been in Cyprus for two years, and joined the RAF in1966.