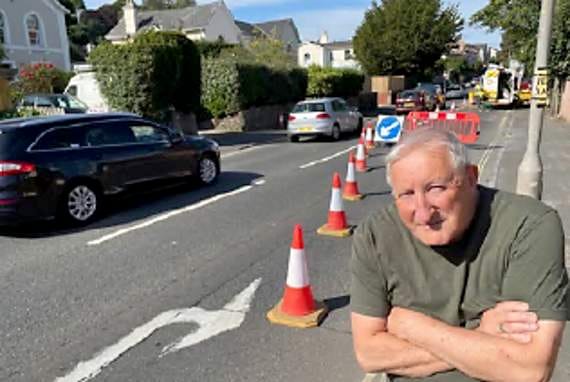 ANOTHER lane closure near the Penn Inn roundabout led to even heavier traffic this week as complaints were raised over a complete lack of warning.

Gas works on Torquay Road, Newton Abbot, on Tuesday went ahead as the town’s mayor said locals were left in the dark.

The area around Torquay Road is already beset by traffic as the A380 is currently being resurfaced. Mayor Mike Joyce, claimed that nobody in the town had been given a heads up over the disruption which had been planned ‘ages ago.’ ‘I’ve spoken to everyone about it’, said Cllr Joyce. ‘Nobody had a clue, what if one the houses cut off by the works needed to move house today.’

Devon County Council suggested the Mid-Devon Advertiser contact Wales and West Utilities who were doing the work. The company explained that permission was obtained months beforehand from the county council.

NHS pressures: How is the Royal Devon and Exeter Trust performing?

Wales and West Utilities operational manager for Newton Abbot, Andy Taylor said: ‘We are working in the Torquay Road, area of Newton Abbot to connect a new property to the gas network.

‘In agreement with Devon County Council and in order to keep the local community, road users and our colleagues safe while we work, one lane has been closed along Torquay Road from its junction with Forde Park and Hillmans Road.

‘Barring any unforeseen circumstances, we expect to complete our work and fully reopen the road tomorrow afternoon (Wednesday).‘Our engineers will be following all hygiene and social distancing guidelines and we would respectfully ask that you keep a 2m distance if passing our work site. We’re aware of other roadworks already going on in the area and we’re trying to keep disruption to a minimum.

The spokesman added: ‘Our Customer Service Team is ready to take your call if you have any questions about our work. You can contact them on freephone 0800 912 2999 or [email protected]. Alternatively, you can contact us on Twitter @WWUtilities or Facebook.com/WWUtilities.’